Nocturnals in the Light of the Day

This weekend, I attended the 7th annual Fotopark Exhibition, held in Bratislava. As the title says, it’s a photo exhibition held in a park. I covered the last year’s edition and my rather surprising win in the last year’s report.

A slight change of the scenery

You can’t please everybody

Last year, the jury said I should focus more on the night photographs, since not many people do that. I took their advice and put together a portfolio of night and twilight photographs I captured earlier this year:

During the day, I talked with quite a few people who were quite taken with my collection. I was the only one who showcased this kind of photos. I got lots of technical questions which I tried to answer as clearly as possible. I hope I inspired at least some of the visitors to try it themselves, even though it’s quite hard to get the night photos you’re at least partly happy with.
When the jury came to evaluate my work, they said something in line of “yeah, it’s quite good, better than last year, but we’d like to see something more extreme”. They were talking about the ridiculously visible Milky Way photos, that are very popular these days (That might change soon. Ian Plant has a different opinion about them). I answered this kind of phots are almost impossible to get in western Slovakia because of light pollution. I’m also not a big fan of “unrealistic” photos that are obtained by using astro-trac for several minutes to capture the Milky Way and then blended together with the regular twilight photo. The jury’s answer was “but the viewer doesn’t care about these things”. I guess you can’t please everybody.

Last year I wrote about the position of landscape photography in Slovakia. I have a feeling most professional jurys consider landscape photography as a second-class “art” that’s just there to please amateurs and uninitiated. The jury’s primary argument is, that there’s so much landscape photography in the world that no one’s original anymore. The competition is simply too great and therefore it’s pointless to showcase photos that aren’t unique, out-of-this-world etc. I’m very happy to report that the photo set that received most votes awarded by the visitors were landscapes. The jury also awarded the honorable mention award to the photographer who presented his mountain photographs from High Tatras National Park. Perhaps this is a sign of changing times and over time landscape photography will eventually get more recognition.

Seven years is a long time. I’ve made a tremendeous progress since the first edition and I’m always looking forward to see complete strangers admiring my humble efforts and talking with about my photos. I’m not sure what I’ll be exhibiting next year, but perhaps I should make an effort to seek out another exhibitions and try something new in addition to this traditional exhibition.

Me with my collection of photographs. Photo courtesy of Andrea Hulalova 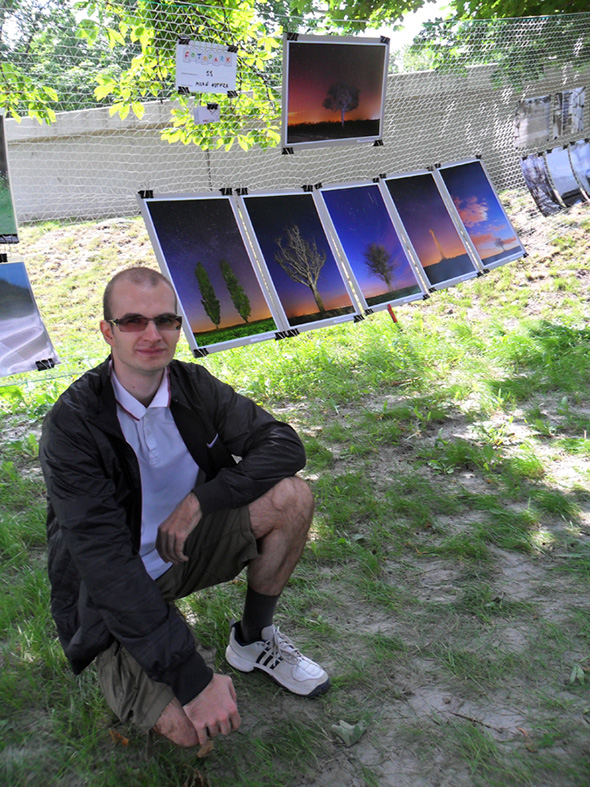