I spent the weekend photographying the 14th annual Slovak tennis championships. This tournament is regarded as one of the best ATP Challenger Series tournaments. Even though it’s not in the same league as big ATP tournaments, it offers some interesting matches each year. Until today, no player managed to win this tournament twice. Slovak tennis player Lukas Lacko (who managed to win the tournament in 2011) defeated the defending champion Lukas Rosol of Czech Republic in three sets 6:4, 4:6, 6:4. Henri Kontinen and Andreas Siljestrom became the doubles champions.

I’ve published more than 80 photos from saturday’s semifinals and sunday’s final on my Slovak blog and my favorite photos from the weekend can be found here (larger versions available after a click). 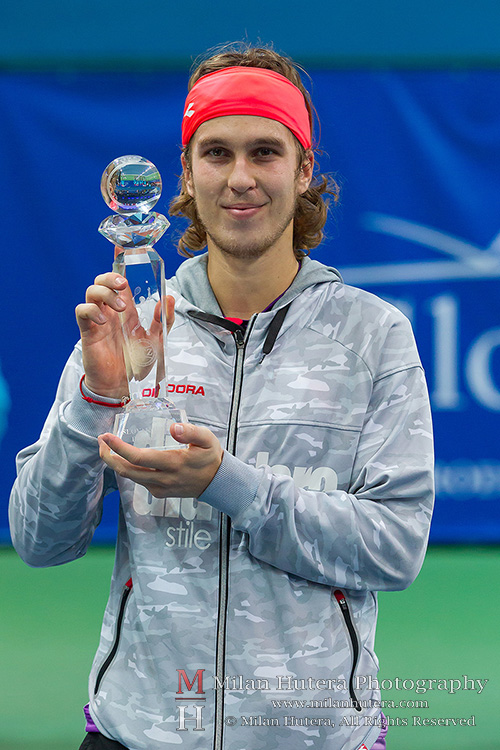 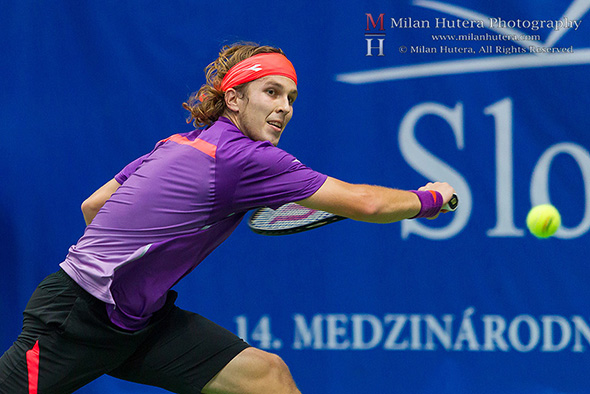 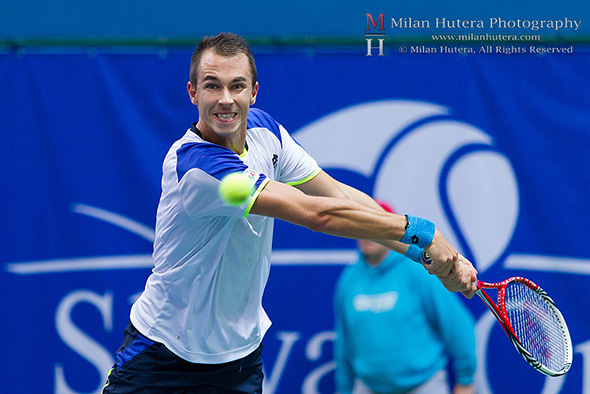 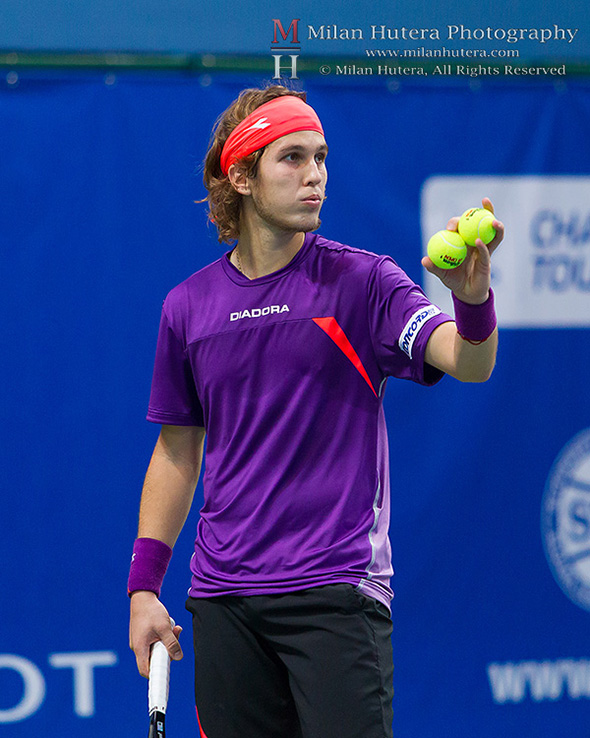 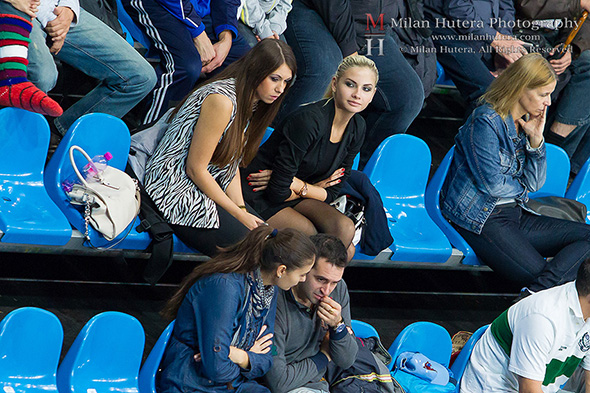 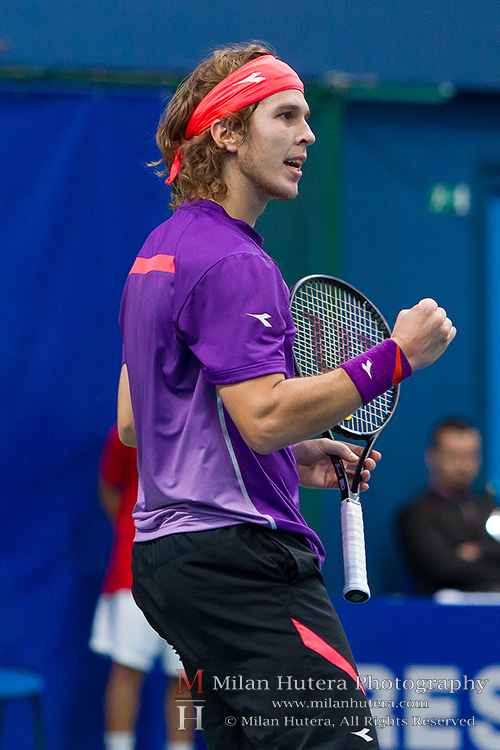 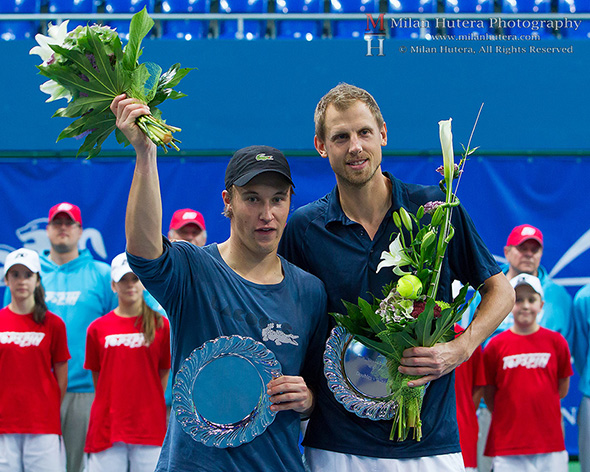 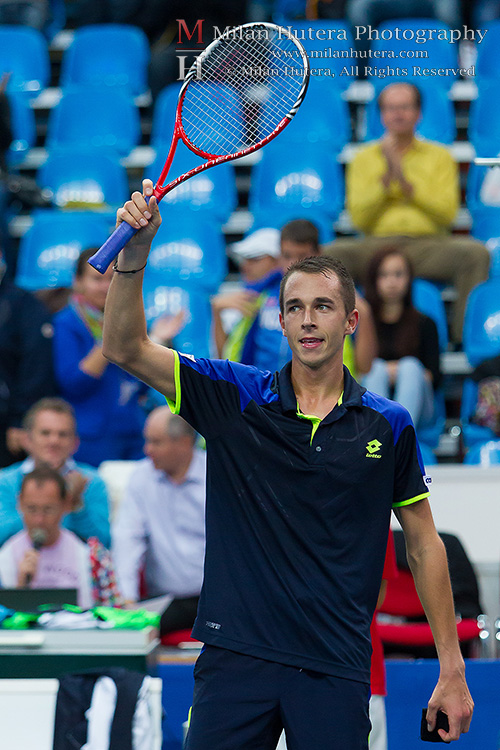 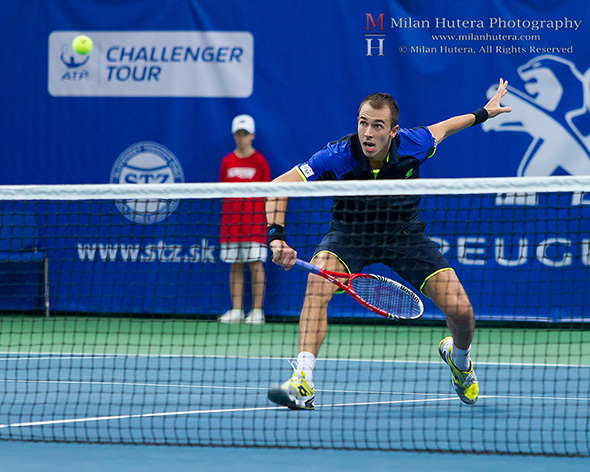 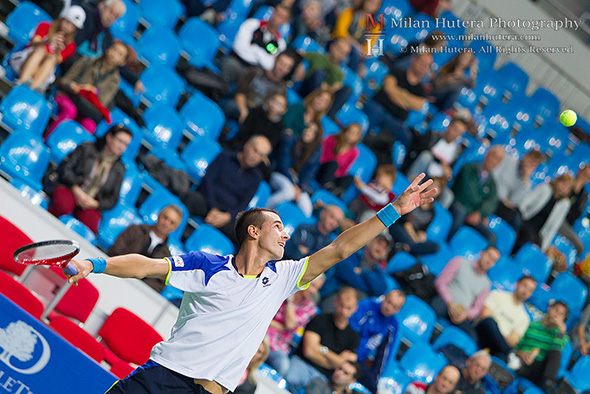 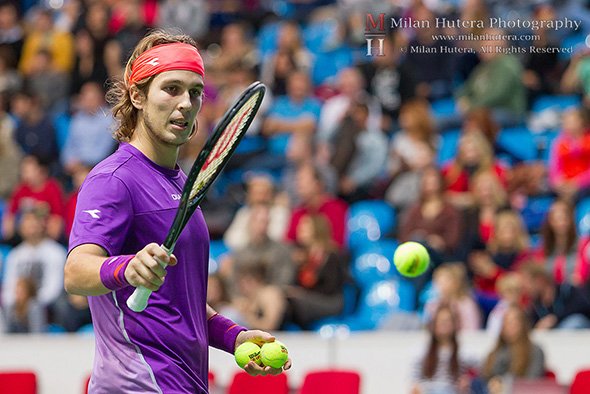 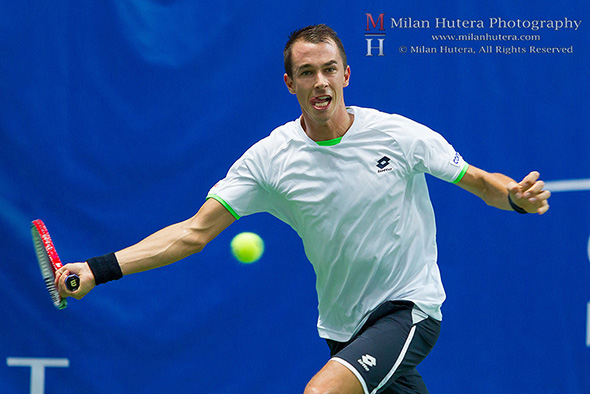 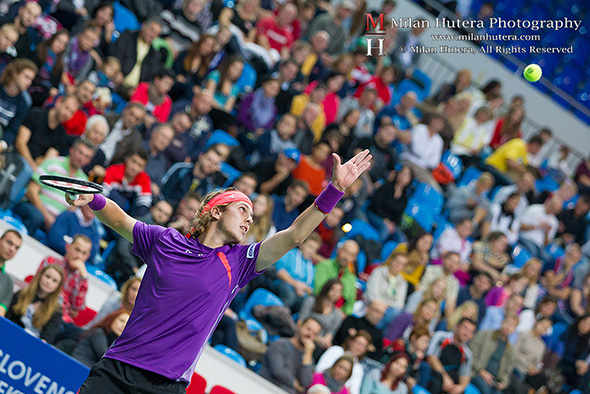 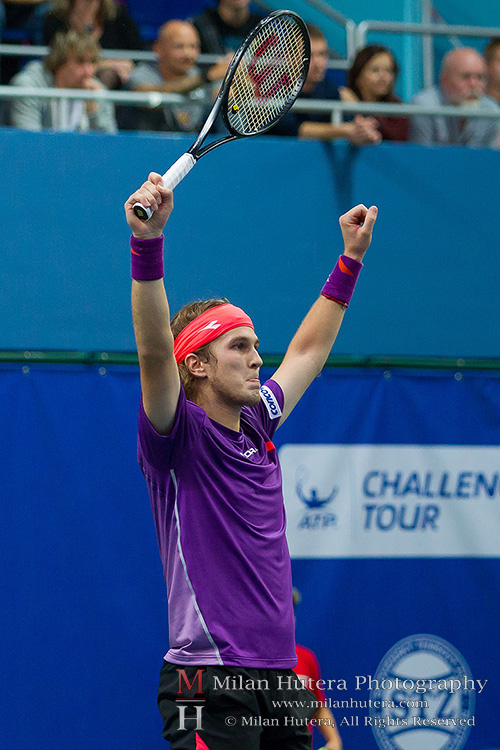 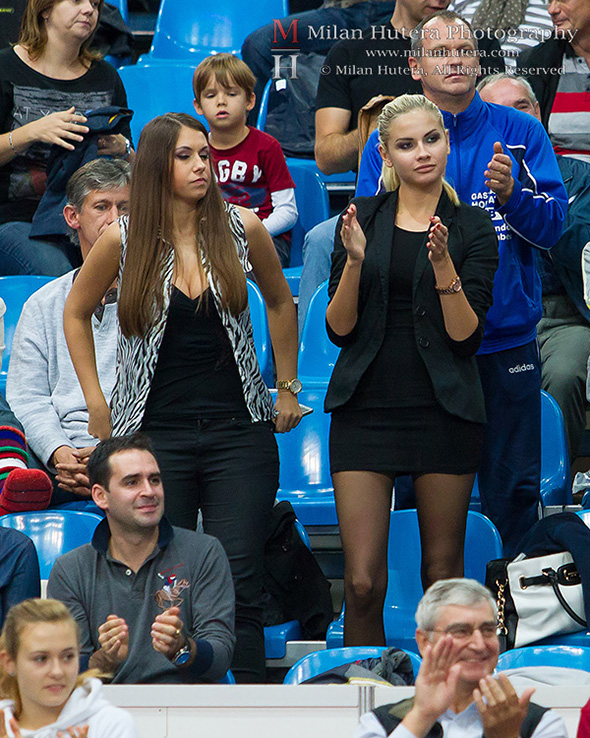 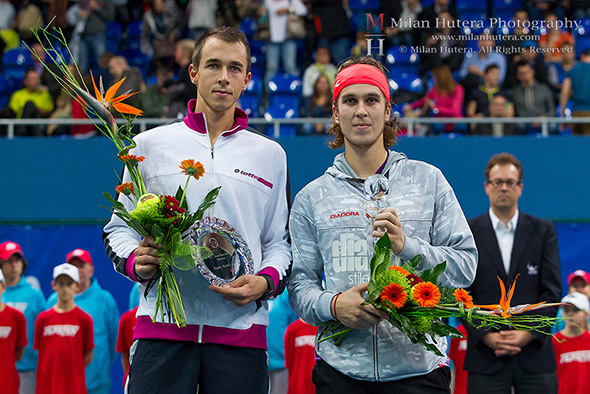 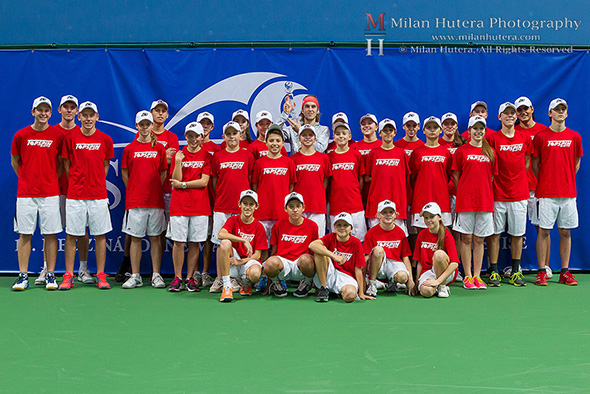 Tennis Classic 2012 – Novak Djokovic vs. Martin Klizan and a bit of insanity

Yesterday I had a chance to attend the 5th annual Tennis Classic exhibition in Bratislava, Slovakia. The line-up for the main singles match was very promissing – the current No. 1 and the winner of the London Masters Novak Djokovic agains the “Newcomer of the Year on ATP Tour” Martin Klizan. Both players are well known comedians. “Nole” Djokovic makes all sorts of pranks on fellow tennis players (both male and female) all the time. Martin Klizan is a player, who doesn’t hesitate to put on a colorful wig (after the successful Davis Cup tie) or large, colorful glasses and a hat (after winning a tournament). Naturally I expected a great show from both of them. Unfortunately, Martin probably left his sense of humor in the locker room yesterday. It seemed he was trying too hard to play regular tennis match (and beat the World No. 1), instead of entertaining the audience. On the other hand, Novak had a lot of funny lines, moments and impersonated several top male and female players (including Serena Williams). In the end, Novak Djokovic not only won sympathies of the sold-out arena, but also claimed the match in two sets 7:5, 6:3.

In the doubles match, Novak Djokovic teamed up with his long-time coach and former tennis player Marian Vajda and Martin Klizan was helped-out by the Slovak Davis Cup hero Dominik Hrbaty. Again, it seemed Marian and Novak enjoyed being on court so much more than Martin and Dominik. The “fun” potential of this exhibition match was enormous, however the evening wasn’t as great as I hoped.

Unfortunately, photographying the event was a nightmare. Apparently, the stars and the moderator weren’t instructed (or simply forgot) there was a booth full of photographers and camera men, who’d love to capture all the official ceremonies. We spent the evening looking at their backs instead. I sincerely hope this won’t happen next time.

The insane moments (I’d dare to call it a momentary lapse of reason) came during the intermission, when the traditional auction of tennis memorabilia took place. The audience bids for tennis rackets and apparel, that was autographed by the stars of the exhibition night. The proceedings usually go to support charity foundations that support underpriviledged kids’ sporting activities and the bids usually end up being several thousand Euros high. Yesterday, the battle for Novak Djokovic’s gear ended at mind-numbing 40 000 Euros. I’m all for supporting a worthy cause, but I honestly cannot wrap my mind around the fact somebody paid so much for a racket, two shirts and a seat in Novak Djokovic’s box on 1 tournament of choice. On the other hand, maybe we’ll see many new tennis stars in the future beause of this generous donation and something tells me the elderly gentleman, who won the auction, will recover rather quickly…

You can find more than 50 photos from Tennis Classic 2012 on my blog: http://hutera.blog.sme.sk/c/313322/Tennis-Classic-2012.html and a selection of my favorite photographs below. 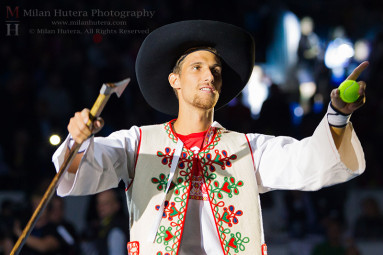 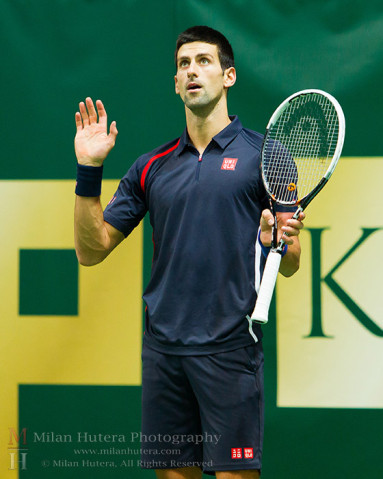 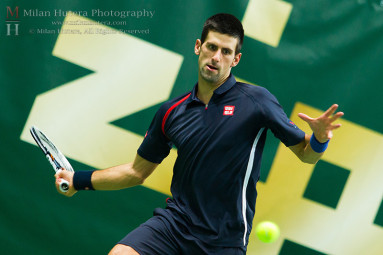 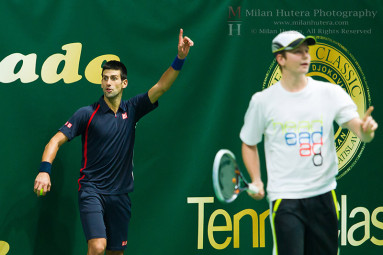 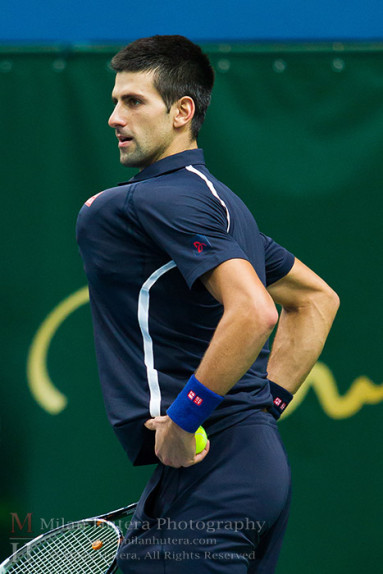 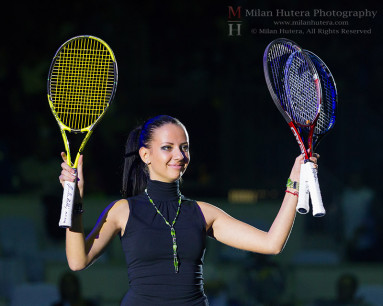 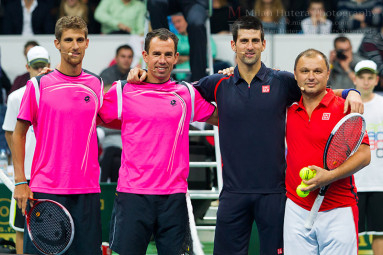 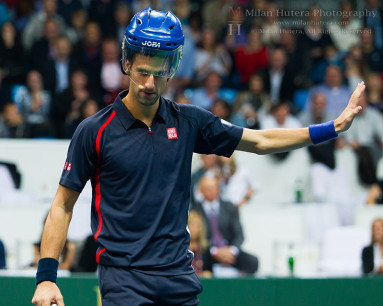 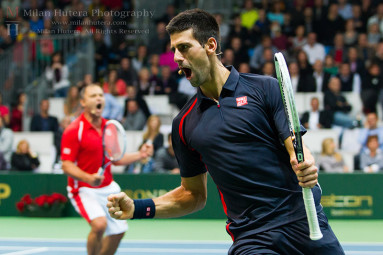 Lots of tennis and lots of photos. I spent the last weekend in Bratislava at the Fed Cup tie between Slovakia and France and witnessed some nice matches. In the end, Slovakia won the tie 3:2, secured the april play-off spot and will have the chance to advance to Fed Cup World Group 1, which we lost rather unfortunately in a tie against Serbia last year. France was a formidable oponent even though both Daniela Hantuchova and Dominika Cibulkova are much higher in the rankings than French players who play in Fed Cup. But rankings make little or no difference in tennis team competitions like Fed Cup or Davis Cup and it showed in the very first match. Daniela Hantuchova (no. 20) spent three hours battling Pauline Parmentier (no. 62). In fact, all singles matches were close even though score might not show it. I had a good time, but I have to seriously consider upgrading and/or adding some gear. A small fishing stool for sure, a new camera … that too 🙂

I spent a good portion of last week on tennis courts on major Slovak tennis events. The Slovak Open is often labeled as small Grand Slam, since both men and women play their tournament on the same week and in the same facility – The National Tennis Center. In 2007 the men’s tournament in Bratislava won the award for best hosted event on ATP Challenger series circuit. We Slovaks were delighted to see our own Lukas Lacko to win both singles and doubles competition. Due to the bad economy, the women’s ITF series event has lower prize money and it’s not as attractive for top players as it used to be, but the players who entered still provided some decent matches. The first seeded Lesia Tsurenko of Ukraine claimed the title.

The biggest tennis event of the season was scheduled on monday. The fourth annual Tennis Classic had the most special guest – current World no. 1 (as of November 21st) of women’s singles ranking – Caroline Wozniacki, who played a singles match against the Slovak no. 1 Dominika Cibulkova. With no points at stake, both players concentrated on providing as much fun and laughter as possible. Especially Caroline was a riot! Girls were later joined by the famous tennis entertainers Henri Leconte and Mansour Bahrami for a crazy mixed doubles match.

The last day of Davis Cup tie often promises dramatic, close matches. The tie between Slovakia an Ukraine was no exception. The duel of team leaders Martin Klizan of Slovakia and Sergij Stakhovsky of Ukraine provided close games with many nerve-wrecking points. The key moments came in the third set. Martin Klizan managed to come back to what appeared to be a lost third set – he was losing 2:5 in a tie-break and still gained the set, eventually the whole match and deciding thid point for team Slovakia. The final score was 6:4, 3:6, 7:6, 6:2. In the last singles game, Pavol Cervenak of team Slovakia defeated Artem Smirnov in straight sets. Photos from the last day of Davis Cup tie on my blog: http://hutera.blog.sme.sk/c/275806/Davis-Cup-SlovenskoUkrajina-Nedela.html

Davis Cup and Saturday mean it’s doubles time. Often times it’s the deciding match in a Davis Cup tie and althoug it wasn’t the case this time – it provided an emotional five-set drama. Luckily, the Slovaks Filip Polasek and Igor Zelenay were on the winning side as they defeated Sergij Stakhovsky and Sergey Bubka. The final score was 7:5, 6:7, 6:2, 6:7, 6:4 and the Slovak team now has the 2:1 lead. Also, there was a surprise guest in the stands. The world athletics legend Sergey Bubka (pole vaulting) came to see his son competing in the world’s most prestigious tennis competition. Photos from day two on my blog: http://hutera.blog.sme.sk/c/275732/Davis-Cup-SlovenskoUkrajina-Sobota.html

The 2011 Davis Cup 1st Europe/Africa group play offs brought together teams Slovakia and Ukraine. Both teams lost their previous Davis Cup ties and must win this play off to stay in “the third league” of the most prestigious mens tennis competition. The losing team will descend into 2nd Europe/Africa group. After the first two matches the score is tied 1:1. In the first match Martin Klizan of Team Slovakia defeated Illya Marchenko in four sets 6:7, 6:3, 6:1, 6:3 and in second match Sergiy Sakhovsky of Team Ukraine defeated Pavol Cervenak in three sets 7:5, 6:2, 6:1. My photographs from day one can be found on my blog: http://hutera.blog.sme.sk/c/275668/Davis-Cup-SlovenskoUkrajina-Piatok.html

Yesterday I had the privilege to attend a wonderful event called Classics under Stars. The basic idea is to bring the opera classics into gardens of beautiful Chateaus located in Czech republic. The opera chosen for this year was Giuseppe Verdi’s “Nabucco”. The biblical story about the inprisonment of Jews in Babylon is one of the best known operas. The performance in Lednice was the last event of this year and I must say it was wonderful. You can see some of the photos I took on my blog: http://hutera.blog.sme.sk/c/273647/Klasika-pod-hvezdami-2011-Nabucco.html

Yesterday I attended the Grand Prix 2011 in Bratislava. This four day equestrian event is surely one of the top equestrian events held in Slovakia. The photos are from small tour, medium tour and big tour competitions. Photos from the event are located on my blog: http://hutera.blog.sme.sk/c/273041/Grand-Prix-Bratislava-2011.html